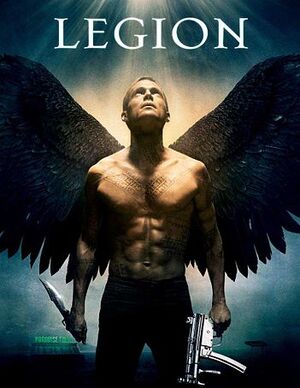 Legion is a 2010 supernatural action film and the prequel to the Dominion series.

An out-of-the-way diner becomes the unlikely battleground for the survival of the human race. When God loses faith in humankind, he orders archangel Michael, in addition to a legion of other angels, to bring the Apocalypse to Earth and exterminate the human race. However, Michael rebels against the order and decides to help the humans. Humanity's only hope ends up lying in a group of strangers trapped in a desert diner with the Archangel Michael.

The Archangel Michael falls to Earth in Los Angeles and cuts off his wings. He steals a police car after a policeman is killed by another officer who is possessed. He then heads for the Paradise Falls diner, near the edge of the Mojave Desert. Meanwhile, Kyle, a single father driving to Los Angeles, stops at the diner. There he meets the owner, Bob Hanson; Bob's son, Jeep; Percy, the short-order cook; Charlie, a pregnant waitress; a married couple, Howard and Sandra Anderson; and their rebellious teenage daughter, Audrey. An old woman enters the diner. She seems pleasant at first, but then begins taunting the diner's patrons. When Howard confronts her, she rips his throat open, screeches that they are all going to die, and climbs up the ceiling like an insect. Kyle shoots her before she can kill Jeep. Percy, Kyle, Sandra, Audrey, and Charlie try to get Howard to the hospital, but they are forced to turn back after passing through a swarm of flies.

Michael arrives and arms the patrons as the entire sky plunges into blackness. Hundreds of cars approach, filled with possessed people who begin to attack the diner. Michael leads the patrons in the fight, but Howard is dragged away. Later, Michael explains that God has lost faith in mankind and has sent His angels to destroy the human race. He also reveals that Charlie's baby must stay alive, as it is destined to be the savior of mankind; Michael disobeyed God's order to kill Charlie's baby, as he still has faith in humanity. The next morning, Sandra discovers Howard crucified upside down behind the restaurant and covered with huge boils. She tries to rescue him, but he violently explodes into acid. Percy dies shielding Sandra from the blast, exposing parts of his spine, and Sandra is driven insane. Meanwhile, the remaining survivors hear a radio transmission that reveals there are other pockets of resistance. One such refuge is nearby, but Michael advises them not to go, since they would be too vulnerable on the move.

That night, a second wave of possessed attack. Kyle is lured out by a trap and killed, and the attack of a possessed boy pushes a panicked Charlie into labor. Audrey and Michael help her deliver the baby as trumpets sound, signaling the approach of the Archangel Gabriel. In a panic, Sandra breaks her restraints and tries to give the baby to the possessed, but Michael guns her down. Moments later, Gabriel enters the diner and seriously injures Bob, slicing his midsection with his razor-sharp wings. Michael urges the group to escape and enigmatically tells Jeep to "find the prophets, learn to read the instructions". The hordes of possessed humans are unable to approach Charlie's baby, so Jeep, Audrey, Charlie, and the baby make their way to Michael's cruiser. Gabriel and Michael fight to a standstill, ending with Gabriel's stabbing Michael through the chest with his mace. Michael dies and his body disappears. Dying, Bob uses a lighter engraved "hope" to ignite the diner's gas main and blow up the diner, incinerating himself and the remaining possessed.

Jeep's body is covered in the same mysterious drawings seen on Michael's body; Jeep concludes that the tattoos are his instructions. Gabriel then appears and swoops down on the fleeing car. As he tries to reach Charlie, Audrey jumps on him and sacrifices herself by yelling at Jeep to slam on the brakes, sending her and Gabriel through the front windshield as the car crashes and buys Jeep and Charlie time to get away. Gabriel finally corners the three in the nearby mountains. He is about to kill them when Michael descends from Heaven, an angel once more, and stops Gabriel. Michael tells Gabriel that Gabriel gave God what he asked for but Michael did what God needed, thus giving humanity another chance; Michael also gives the impression that everything that happened so far was part of God's plan to test His angels and that Gabriel failed Him. Ashamed, Gabriel leaves. Michael explains to Jeep that he is the child's true protector and to have faith they will see him again. Michael then flies off. Charlie and Jeep make it to the top of the mountain and see a small town in the valley below. Sometime later, Charlie, Jeep, and the baby are seen driving off into the distance with a station wagon full of weapons. 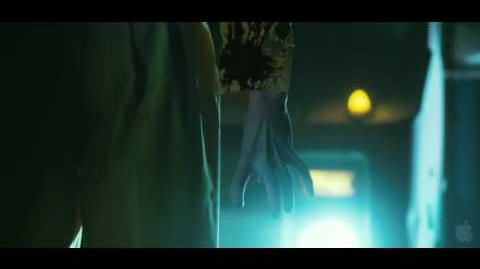 Retrieved from "https://syfy-dominion.fandom.com/wiki/Legion?oldid=8431"
Community content is available under CC-BY-SA unless otherwise noted.